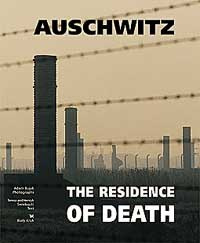 We offer our readers this album about Auschwitz concentration camp, which contains both archival material when the camp was in operation and contemporary photographs of what has left.

We offer our readers this album about Auschwitz concentration camp, which contains both archival material when the camp was in operation and contemporary photographs of what has left. The archival material, in the form of documents and photographs, comes mainly from the collections of the Auschwitz-Birkenau State Museum in Oświęcim, which assumed responsibility after the war for preserving the evidence of Nazi crimes and commemorating the martyrdom and death of the victims. The archival material illustrates the site of the camp and the buildings there in the years 1940-1945 and, more importantly, depicts the fate of the people deported to Auschwitz-both those who were put to death in the gas chambers immediately after arrival, and those who were sentenced to labor and death in the concentration camp. The contemporary photographs are the work of Adam Bujak, an artist who has held a place among the leading Polish photographers for years. His photographs reflect the present appearance of the site of the concentration camp within the boundaries of the Museum. They depict what is left of the camp, sometimes in its original state and sometimes in the form of ruins, the witness to and evidence of the crimes of an inhuman totalitarian system. These photographs portray the most important things that distinguish the Museum from other similar institutions around the world: the original site of the greatest crime of the twentieth century, the Holocaust. "Soil where the dead are most present," as the sculptor Henry Moore defined the Auschwitz site. The visual material in the album is supplemented by passages from texts written clandestinely, mostly by prisoners in Auschwitz. Some of them had been buried on the grounds of the camp and were discovered after the war; others were smuggled out of the camp, in the form of secret messages or reports, while the war was still going on. Other texts are passages from accounts, reports, or memoirs that prisoners wrote after escaping from the camp. There are also descriptions of scenes and events that only the perpetrators, the SS men from the camp garrison, could know about and report on. These accounts date from immediately after the war, when the writers were in internment camps or in prison.