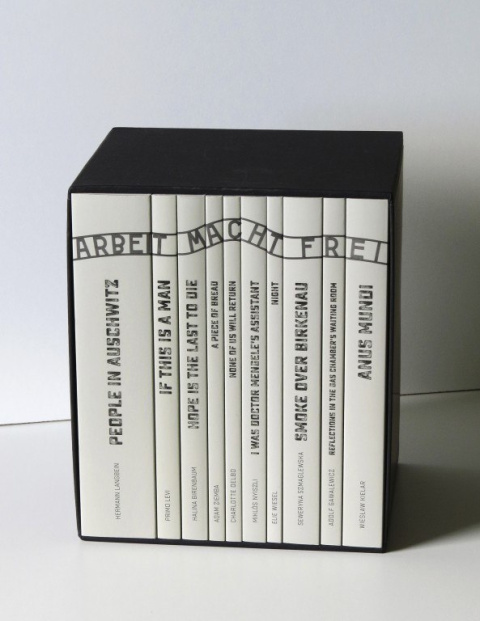 That is a selection of the most interesting memoirs, authorship of former prisoners of the German Nazi concentration and extermination camp Auschwitz-Birkenau.

The ten publications that make up this bibliophile edition are ten varying perspective views of Auschwitz. The authors differ in all aspects: age, and consequently wealth of experience, as well as intellectual formation, nationality and above all fate in the camp.

Amongst them are Jews condemned to extermination and those miraculously saved, such as: Halina Birenbaum, Primo Levi, Miklós Nyiszli or Elie Wiesel, as well as non-Jews, arrested primarily for activities in the resistance movement, such as: Charlotte Delbo, Adolf Gawalewicz, Wiesław Kielar, Hermann Langbein and Seweryna Szmaglewska. The whole is complemented by the memories of the Polish Catholic priest, Adam Ziemba.

All these stories of specific individuals perfectly show the complexity of the Auschwitz history: as the Holocaust centre of European Jews, but also a labour camp and place where the prisoners fought persistently in various ways not only for survival, but also for preserving human dignity. These books are like pieces of a puzzle, each of which adds important information to the overall look. A puzzle that was in fact never completed…

The publication of the edition, available in Polish and English was possible due to the financial support of Volkswagen AG.

Halina Birenbaum,Hope is the Last to Die

Charlotte Delbo, None of Us Will Return

Adolf Gawalewicz, Reflections in the Gas Chamber’s Waiting Room: From the Memoirs of a Muselmann

Primo Levi, If this is a Man

Adam Ziemba, A Piece of Bread